Two important acquisitions in the Food & Beverage space are impending in India: H. J. Heinz’s Complan and GSK’s Horlicks and Boost brands1. These 3 brands are believed to represent almost two-thirds of the Indian children’s Health-Food Drink (HFD) market that is estimated to be worth between US $ 860 million2 and over $1 billion (70 billion Indian rupees)3 in annual sales. As a result, strong contenders are currently bidding to acquire these brands: global consumer-goods giants Unilever, Nestle and Coca-Cola for Horlicks and Boost, and Zydus Cadila Group (a leading Indian pharmaceutical company) for Complan.

The current position of the brands for sale is being shaped by mixed factors. On the positive side, Horlicks and Complan are market leaders with a lot of heritage in a strong category. But, on the negative side, they are quickly losing market share to a variety of contenders – both international premium and local affordable players.

Stuck in the middle, these heritage brands are being squeezed; keeping pace without carefully revisiting ingredients, tastes and pricing could be a challenge. Buyer beware. 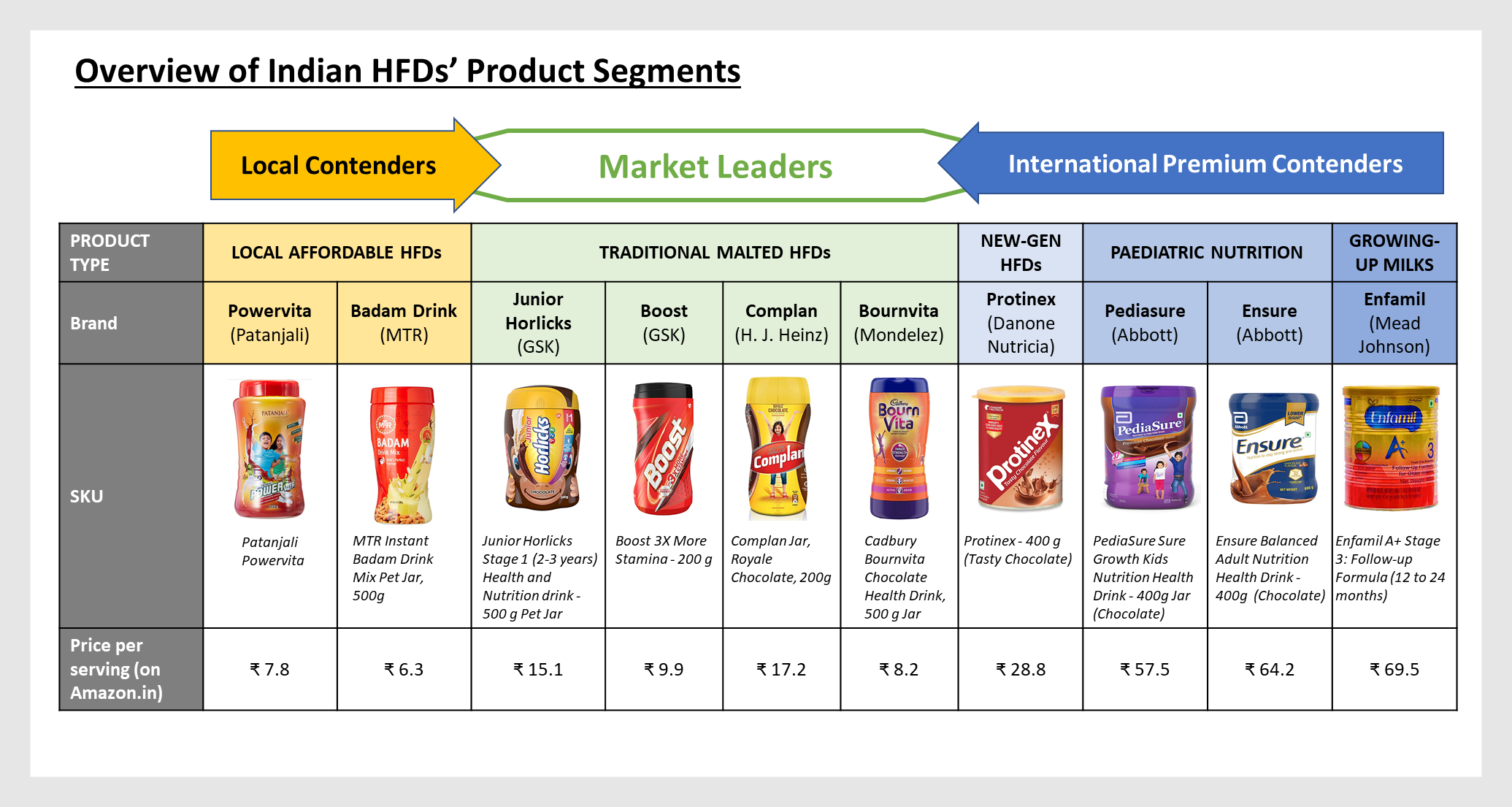 Horlicks, Boost and Complan: Historic Leaders of the HFD space

The market of HFDs in India emerged in the 1950s with the introduction of Horlicks, a malt-based nutritious drink. Horlicks quickly grew in popularity, especially in South and East India where availability of milk was scarce3.

Other brands including Boost (also owned by GSK) and Bournvita (currently owned by Mondelez) followed. As the market matured, brand-extensions were launched including “Junior Horlicks”, a junior range targeting 2 to 6-year-olds, which was launched in 1995.

Capitalising on their uptake among Indian families, these brands worked hard to achieve a broader and broader distribution in the general trade (small store format), even in rural areas. This put them at the centre of health nutrition for children after breastfeeding and weaning.

The past 15-20 years were particularly prosperous for these powder-based malted HFDs. They saw a steep boost in sales driven by the emergence of an Indian middle class and their desire maximize the physical and intellectual development of their children. These parents regard nutritional supplementation as an important way to help their toddlers, pre-schoolers and grade-schoolers to reach their full potential – a belief positively reinforced by frequent marketing and advertising campaigns targeting these families, especially on TV.

But this context also accelerated the uptake of other types of child-nutrition solutions. Boosted by the growth of the modern trade (larger store format) and e-commerce, new competition was able to gain visibility and reputation among parents. The household names Horlicks, Boost and Complan are now being challenged by a variety of other national and international brands that take advantage of limitations among those household brands, such as high sugar content or limited amounts of growth-related nutrients in their formulation.

As a consumer segment, educated middle-class Indian parents are concerned with the amounts of what they consider unhealthy or desirable nutrients and are particularly keen on scrutinizing food labels.

International companies have seen this as an opportunity to launch new HFDs with additional nutrients or the same nutrients as traditional HFDs but in higher quantity. For example, Danone Nutricia’s Protinex was launched to fill a gap in HFDs with high protein content. Its “tasty chocolate” formula contains 8g of protein per serving vs. 3.9g for Junior Horlicks Stage 1 and 5.9g for Complan Jar Royale Chocolate. Furthermore, it also beats competitors on the concentration per serving of most other vitamins and minerals in the formula – making it a “no brainer” for label-reading parents able to pay a premium for a product with better nutrients (as Protinex costs almost twice as much per serving as Junior Horlicks).

In 2000, Abbott launched Pediasure, specially formulated for children aged 1 to 10 years old and conceived of as a full meal replacement for picky eaters. Together with Ensure (targeting adults but also frequently taken by children), Pediasure is estimated to have a 10% market share of the HFD market; and both brands continue to grow quickly2.

This success is attributed to Abbott’s commercial strategy which capitalises on the critical role played by paediatricians in recommending nutrition formulas to parents. In order to boost recommendations, Abbot’s representatives visit these healthcare professionals (HCPs) and educate them about the important role of complete nutrition in a child’s brain and physical development. In parallel, the advent of a large educated middle-class of parents also resulted in a more hands-on approach to children’s health monitoring with regular routine visits to HCPs. And the fact that they could afford these premium products ultimately created a snowball effect for Pediasure and Ensure.

Abbott also promotes its products directly to consumers (D2C) and are widely available in mass distribution channels. This “double-hat” approach, both medical and D2C, is not specific to India but has been the trademark of Abbott Nutrition for market entry around the world: first Abbott Nutrition targets HCPs to drive recommendation of their brands, then after 5-10 years, when their medical reputation has been established, they introduce D2C communication and aim for mainstream distribution to encourage broader product adoption. As in many Asian markets, this approach is paying off in India.

Parents’ concern with the ingredient content of nutritional option has paved the way for the growth of adjacent nutritional categories, particularly growing-up milks.

A large reason why malt-based HFDs had been so successful in India was the fact that milk was not easily available and, when it was, its quality was poor. In contrast, malt-based HFDs were both accessible and able to mask an unpleasant milk taste3.

These historic success factors, however, are losing their relevance. A variety of infant milk formulas are now accessible, and most of them have “follow-up” toddler versions. Mead Johnson’s Enfamil Stage 3 is a particularly strong player in the space and has adopted a message around physical and brain development, competing head to head with traditional malted HFDs who leverage similar marketing lines.

Growing-up milks are sold at a premium price point; for example, Enfamil Stage 3 is four times more expensive than Junior Horlicks on a one serving basis. However, urban middle-class parents are willing to pay that higher price to provide what they perceive as better-quality nutrition, in line with the child-feeding practices of North American and European countries.

The 3 types of contenders that we have laid out all have in common that they are led by premium brands owned by international companies (Abbott, Danone Nutricia and Mead Johnson). But leading HFDs’ competition also comes from the opposite side of the spectrum where local, affordable brands cater to rural families and urban working classes with low incomes. For example, Patanjali’s Powervita has a similar packaging look to Horlicks and Bournvita but is cheaper – ₹ 7.8 per serving (based on Amazon India prices) vs. ₹ 15.1 for Horlicks Junior and ₹ 8.2 for Bournvita.

The differentiation of local HFDs is not just on price but also on the brand’s identity, ingredients and taste. For example, Powervita is inspired from traditional ayurvedic medicine and borrows its marketing terminology from that space: “Shatavari promote health energy level and boost immunity” and “Shankhpushpi & Brahmi [is] good ayurvedic remedy for memory and brain”. In fact, Patanjali was co-founded by a very popular guru, Baba Ramdev, and, as such, has a lot of appeal among families with strong traditional Indian values4.

Beyond ayurvedic ingredients, the adaptation to local tastes can also appeal to Indian consumers. “Badam” (almond in Hindi), present in MTR’s Instant Badam Drink Jar is a good example. The importance of meeting local tastes has even been recognised by international players like Abbott that now manufactures locally its nutritional products with Indian flavours – e.g. “kesar badam” (saffron & almonds) for Pediasure5.

Although local HFDs represent a small amount of the total value of the HFD market due to their lower pricing, there are successfully taking some volume shares from most established players, slowing down the adoption of traditional brands Horlicks and Complan among Indian families emerging from economic scarcity.

While Horlicks and Complan’s brand equity should still continue to attract socially ascending families to its products once they can afford them, the growth will certainly be lower than would have been originally predicted based on pure socio-economic factors.

The long-term future of Horlicks, Boost and Complan will very much depend on the type of innovation they manage to bring to the market in both tastes and ingredients. A substantial increase in protein, vitamin and mineral content could certainly help them to stay relevant, ultimately benefitting Indian children.